Copyright ã 2003, James Michael Howard, Fayetteville, Arkansas, U.S.A. When the following treatise was first written, in 1979, an individual could not assume the copyright upon completion of one's work. So, this is copyrighted at this time.

(The purpose of this paper is to present a hypothetical model which may account for the molecular mechanism of the H1 histone-NHCP-DNA interactions involved in transcription and the relationship of H1 phosphorylation to the extension of G1 type chromatin induced by phosphorylated NHCPs.)

A strong case may be made for the interaction of H1 histone proteins and the group of proteins variously termed nonhistone chromosomal proteins (NHCP) in the temporal or differential control of transcription of deoxyribonucleic acids in the form of chromatin. H1 histones restrict DNA from being used as a template for transcription (1). Whereas NHCPs alone are ineffective in producing selective transcription, a combination of H1 histones and NHCPs are able to induce transcription in a specific manner (2). Nucleosomes, comprised of the other histones found in chromatin with the exception of histone H5, are not sufficient to restrict transcription (3) most probably because of the bases of the two turns of DNA, wrapped smoothly around the nucleosome core (4,5), are as accessible to solvent as are the bases of DNA free of proteins (6). H1 histones have been determined to be present in nucleosome-DNA chains associated with the so-called "linker-region" of DNA which connects nucleosomes and where H1 molecules protect this DNA from nuclease attack (7.8). The nuclease resistance appears to be associated with A-T rich sequences of DNA (9). It has been suggested that the H1 histones are bound to nucleosomes on only one side (10). The folding or packaging of nucleosome-DNA chains into G1 type superstructures appears to be mediated by H1 histones (11). Removal of H1 histones from these compact structures results in relaxation of extension of these into S type chromatin (12). The state of phosphorylation of H1 histones is evidently involved in this transition from compact to extended structures. Phosphorylated H1 histones are associated with relaxed DNA and, conversely, nonphosphorylated H1 histones are associated with compact DNA (13). Two separate groups of investigators have recently suggested possible functions for the H1 histones. Spadafora, et al., have suggested two basic functions: a. prevention of migration of nucleosomes and b. compaction of nucleosome-DNA chains (14). Dolby, et al., have provided data which indicate that the relaxation of compact G1 superstructures into S type cell chromatin is brought about by an interaction of phosphorylated H1 histones, NHCPs, and DNA (15). Various subfractions of H1 histones have been found to interact differently with DNA and suggest that these subfractions could cause structural heterogeneity in chromatin (16). The NHCPs have been implicated with the H1 histones to produce differences in the linker-region spacing of the internucleosomal regions of DNA (17). Phosphorylation of the NHCPs may be a part of the functional mechanism in the regulation of transcription of individual genes (18), and these NHCPs, particularly the phosphorylated ones, bind to DNA in a selective fashion (19). The differing interactions of the H1 histones with DNA, the selective interactions of the NHCPs with histones, and the necessity of H1 histones and NHCP interactions for specific gene transcription suggest the possibility that recognition sites may exist in both S type and G1 type chromatin.

The purpose of this paper is to present a hypothetical model which may account for the molecular mechanism of the H1 histone-NHCP-DNA interactions involved in transcription and the relationship of H1 phosphorylation to the extension of G1 type chromatin induced by phosphorylated NHCPs.

The model presented here suggests: a. that specific recognition sites for NHCPs do exist in the compact chromatin and b. that H1 histones are necessary for these sites to interact specifically with NHCPs for transcription. Both of these sites are determined by the DNA and, therefore, the DNA codes for both its own repression and derepression. It has been mentioned that H1 proteins may prevent nucleosomal migration. Nelson, et al., have determined that nucleosomes, free of H1 histones, attach randomly to DNA (23) probably due to DNA presenting high regions of negative charge density (24). H1 histones can be dissociated from native chromatin and will recombine with exogenous DNA which is A-T richer and form more stable complexes (25,26). These data and the findings that: a. chromatin nuclease resistance is provided by H1 histones in the linker-regions of nucleosome-DNA chains and b. that this nuclease resistance appears to be associated with the A-T richer sequences of DNA provide the bases of the proposed recognition sites in heterochromatin. The H1 histones combine first with DNA on the regions of high A-T content primarily and [then] regions of lesser A-T content secondarily during the recombination of the various components of chromatin at the end of chromatin synthesis. The nucleosomes would become attached to the ends of the H1 histones where these are combined with the DNA. In areas of very low A-T content insufficient to hold the H1 molecules, nucleosomes would aggregate in a closely packed fashion separated by small lengths of linker-region DNA. These regions of nucleosome-DNA without H1s or low amounts of H1 could be the regions of chromatin which remain compact from one cell generation to the next. Notwithstanding the involvement of other chromosomal proteins necessary from contraction of nucleosome-DNA-H1 chains (27,28), once the H1 attach to the adjacent nucleosome (11,29) a DNA dependent structure could be formed which would be gene specific, i.e., the position of the phosphorylation sensitive site would be specific. The bond of the free end of the H1 histone to the linked nucleosome is the proposed phosphorylation site of the G1 chromatin in this model. The linkages of H1 histones and adjacent nucleosomes interspersed with those areas composed of only nucleosomes would generate a very specific recognition site for the activated or phosphorylated NHCPs. Kleinsmith has provided a list of evidence suggestive of the roles of phosphorylations of the NHCPs: a. phosphorylated NHCPs are highly heterogeneous and these phosphorylations are tissue specific, b. changes in phosphorylated NHCPs correlate with changes in chromatin structure and gene activity, c. addition of phosphorylated NHCPs increases RNA synthesis in vitro, d. phosphorylated NHCPs bind selectively to DNA, and e. cAMP induced decreases in phosphorylation of NHCPs correlate with enhancement of RNA synthesis (3)). Species specific variation in H1 phosphorylations have been demonstrated (31). I suggest that the phosphate moieties of the phosphorylated NHCPs are transferred to the H1 histones via a protein kinase with the resultant relaxation of the specific heterochromatin.

The result of the above relaxation is an extended nucleosome-phosphorylated H1-NHCP-DNA chain which is active in transcription. It is established that the H1 histone protects linker-region DNA from nuclease attack and the nucleosomal DNA is more resistant to nuclease attack (7,8). Goodwin, et al., have presented a model of nucleosome-DNA interactions which suggests that the major groove of DNA is accessible as a site of attachment of NHCPs while the core histones are involved in interactions with bases in the minor groove (32). This suggestion and the suggested reaction of this paper could account for the two aforesaid nuclease resistances: 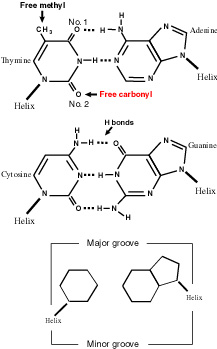 I propose that the non-peptidyl amino group of the H1 histone reacts with the number two carbonyl of the thymine base of DNA. This carbonyl is located within the minor groove of the double helix of DNA. This reaction would account for the H1 histone preference for the A-T rich regions of DNA and provide a very specific, gene directed site for H1 reaction. I suggest repression is determined by the number and spacing of the thymine bases and the "fit" of the lysine amino groups with the carbonyls of the thymines. In the cases of nuclease protection, H1 molecules reacted with the thymines in the minor groove of DNA would place the H1 peptide chain directly in the minor groove in a position where it would hinder approach of nuclease to the sugar-phosphate backbone of the DNA of the linker-region. DNA wrapped smoothly around the nucleosome core and attached via the thymines of its minor groove would orient the backbone against the nucleosome core and provide a great deal of protection from nuclease. When the amino group of the lysine of H1 histone reacts with this number two carbonyl of thymine, I suggest that the hydrogen bonding of this thymine with adenine is weakened due to the number one carbonyl becoming less electronegative and thus freeing the hydrogen bonded hydrogen of the adenine. That is to say that the interactions of the H1 histones and DNA produce a destabilization of the double helix at this point in the DNA. Alden and Kim have calculated that primarily the major groove of B-DNA and the minor groove of A-DNA have sufficient accessible surface area to be recognized by a probe size corresponding to the side chains of amino acids (33). It is now fairly well established that DNA rich in A-T pairs prefers the B conformation. Reaction of H1 histones with the thymines in the minor groove of A-T rich regions of DNA could possible destabilize the DNA in these areas of the double helix and facilitate the interactions of the side chains of the amino acids from the NHCPs with the bases of the major groove. This may explain the necessity for the participation of both H1 histones and the NHCPs for selective control of transcription. The phosphorylated NHCP would release the compact chromatin by phosphate transfer to the H1 histone and then participate with the, then H1 destabilized, DNA to allow DNA dependent RNA polymerase to function.